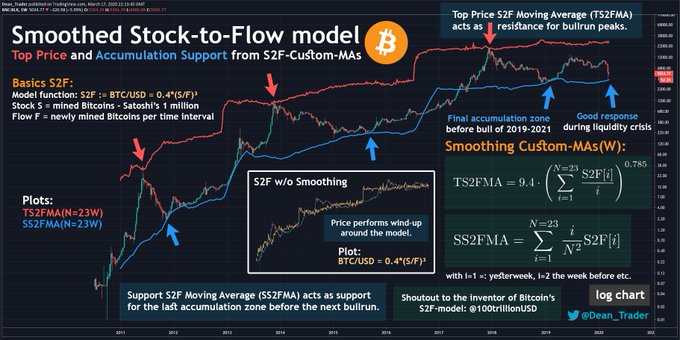 A recent Bitcoin price model by a well-known analyst is guiding a massive increase in the premier cryptocurrency’s price. What’s more, this price increase – to a whopping $288,000 – could happen as soon as this year.

An April 27th blog post by crypto analyst “PlanB” is now examining Bitcoin’s potential price gains. PlanB is using a variation of the popular “stock-to-flow” (S2F) model. Analysts commonly use the stock-to-flow model in order to calculate the future value of an asset.

Specifically, the model uses the supply of new assets entering circulation – through mining, in the case of Bitcoin. As such, many S2F analysts believe that the upcoming halving will dramatically increase the potential valuation of Bitcoin.

Now, PlanB is chiming in with a variation on the traditional Bitcoin stock-to-flow model. This new model, known as the “BTC S2F cross asset”, or S2FX, model. PlanB’s S2FX model combines the valuation of Bitcoin with assets such as gold and silver.

According to PlanB, Bitcoin as an asset is going through a series of “phase transitions”. Up until now, Bitcoin has gone through its “proof of concept”, “payments”, and “e-gold” phases. Since the last halving, however, PlanB argues Bitcoin is primarily a “financial asset”.

This following chart shows that each new phase for Bitcoin brings a substantial uptick in the premier cryptocurrency’s valuation with it. With a traditional S2F, PlanB previously said Bitcoin was on course for a $100,000 valuation.

However, we could now be on the cusp of a new phase shift, following the upcoming Bitcoin halving. PlanB extrapolates the performance of Bitcoin, as well as gold and silver, in order to forecast its future price – which he now says could be higher than $100,000.

“The S2FX model formula can be used to estimate the market value of the next BTC phase/cluster […] of $5.5T”, PlanB notes in the summary of his blog post.

In fact, PlanB suggests the S2FX model formula has a “perfect fit” to the data, with an R2 of 99.7%. However, PlanB also notes that the S2FX model is only a “first step”. Consequently, the model is still in need of peer-review.